After The Curtain Falls: Theatre Reflections

The Middle School students recently performed an original, collaborative triptych of theatre shorts titled Abducted. After all the workshops, writing, casting, staging, producing, directing, designing of sets and costumes, marketing, ticket sales…the final curtain fell. The students then took some time to look back on the process of creating live theatre and to reflect on what that process meant to them.  Here are their thoughts……… 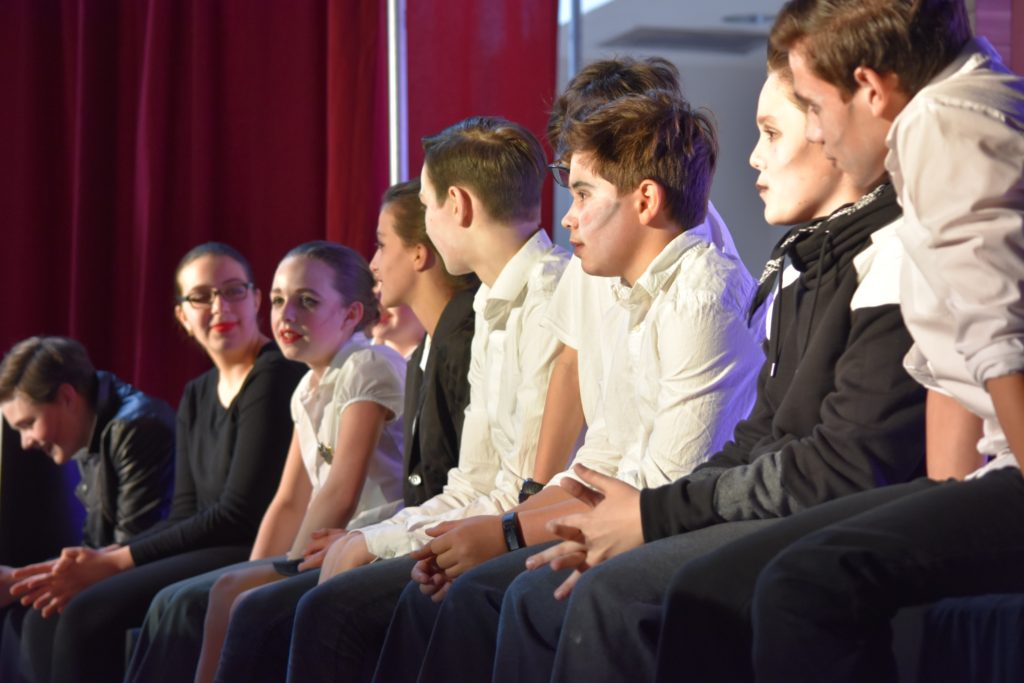 “For me, I think that the overall production was good, but the work that was required to put it on was really hard. The hardest part, in my opinion, was definitely organizing the blocking for the scripts. It was hard to mix the writers’ vision of the scene with what was possible, so we had to work hard and alter a lot of things to find a good compromise. In the end, though, I think it was worth it because I had a lot of fun performing and I’m really happy that I was able to be a part of it.”
~C.T.

“As a shy person, the experience of going on stage and giving all my effort to make my character real has made me a lot more confident to stand in front of a crowd. This experience brought us all closer, and it gave us peer collaboration skills. On the marketing team, we designed posters, tickets, and got sponsors. The hardest part was getting sponsors on time, but we all got done on time.
The work we did definitely gave us a really good idea of what it’s like to be older, like calling people for information, collaborating with new people, and planning out large projects.
Overall, the play took nine months to put on. Although we were sometimes behind on our work, we were able to put it all together in time. I think we could have been more organized, but the challenge was important. I do think Clanmore should continue to do this.”
~A.B.

“Every small task that we did during this production helped to make the final product. Probably the hardest part of the production was collecting all of the sound effects, and making sure that on the day of the play we would be able to have the proper sound effects to give the proper feel to the play. Overall, I thought that the whole play taught us to work hard and it also gave us some valuable life skills.”
~J.T.

“I had a great experience working the lighting for the second play, The Election. I enjoyed talking with the people that we rented the lights and speakers from. It would be really cool to make a career out of something like that.”
~J.A.

“The theatre experience was an amazing challenge that pushed our class to work together and to individually take on responsibilities. Learning the ways of drama, prepping for the show, selling tickets, designing costumes, and doing make-up were all in effect in the months before the show. Overall, the entire production was fantastic to make possible and is something I will definitely look back on proudly.”
~E.T. 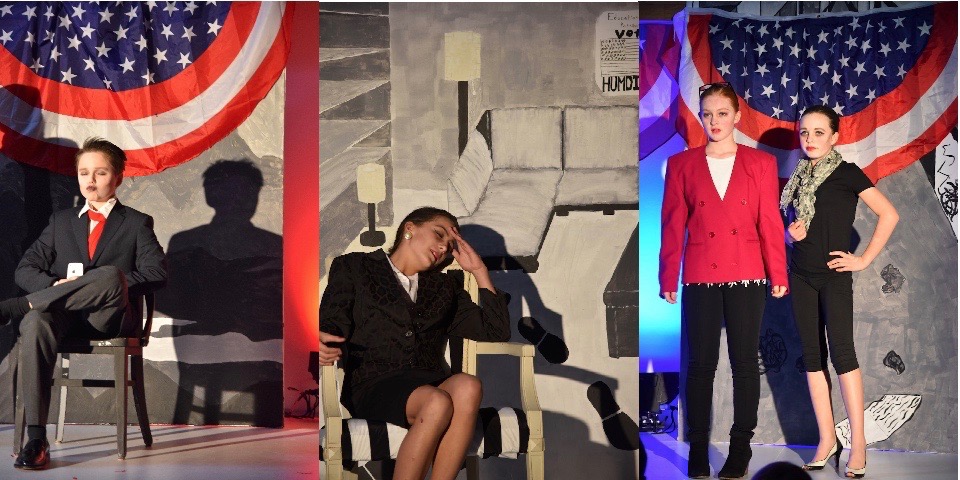 “Theater has been an amazing experience, but it definitely was hard work. My favourite part was planning the costumes with my class. Theater has opened my eyes and made me into a more confident speaker.”
~Z.W.

“Theater was a really fun experience. Definitely, at some points it was very stressful, and you really need to stay on top of your work! I was on tech, and it was very neat seeing all of the expensive materials.  Probably my favorite part was playing around and learning about the sound and lighting board.”
~J.K. 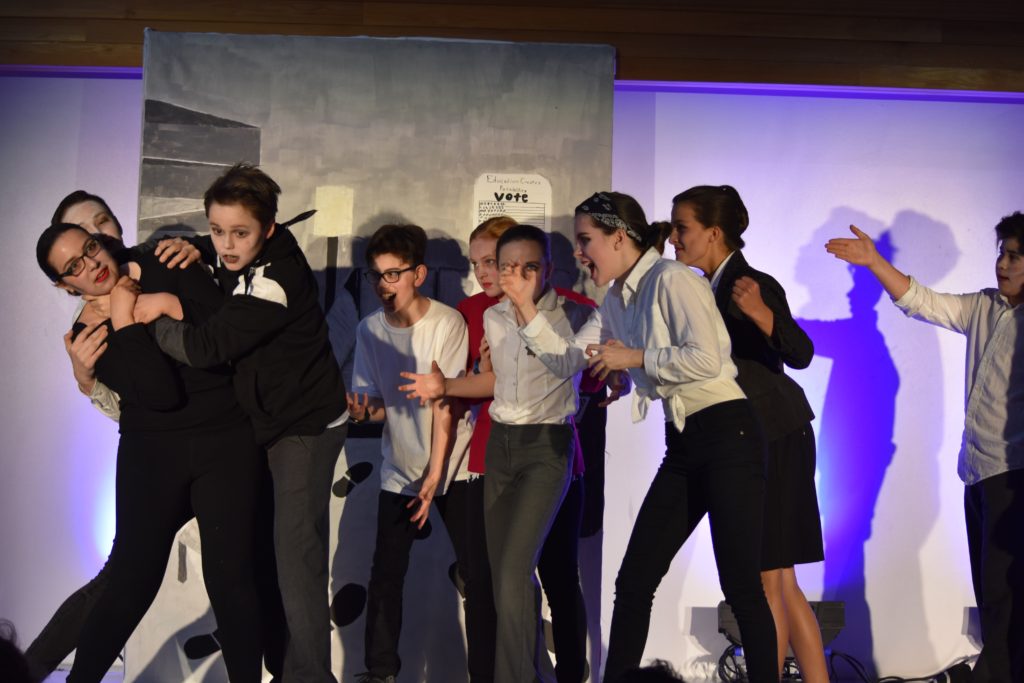 “This play production was one of the most fun experiences that I’ve had in my history of being at Clanmore. When we did the auditions in the beginning I was very nervous that I was going to get a role that I did not like, but that all changed when I was told that I would be acting as Donald Trump. I also was excited about playing the person that would tie the whole play together, the director. Props were a bit of a struggle for me but eventually I got all the props in and we could start rehearsing with them. Performing in front of a crowd didn’t make me any more nervous, it just made me even more enthusiastic about the production and made me want to do more like when I walked off the stage as Donald Trump saying “I’m rich! I have a lawyer!”. Impersonations are one of my favourite things to do which made doing Donald Trump and the director, Harriet Campbell, even more interesting. It was so fun and I want to give a big thanks to Rainer [Clanmore Drama Specialist] for making this amazing experience totally awesome! I really hope I will get to do something like this in the future.”
~F.A. 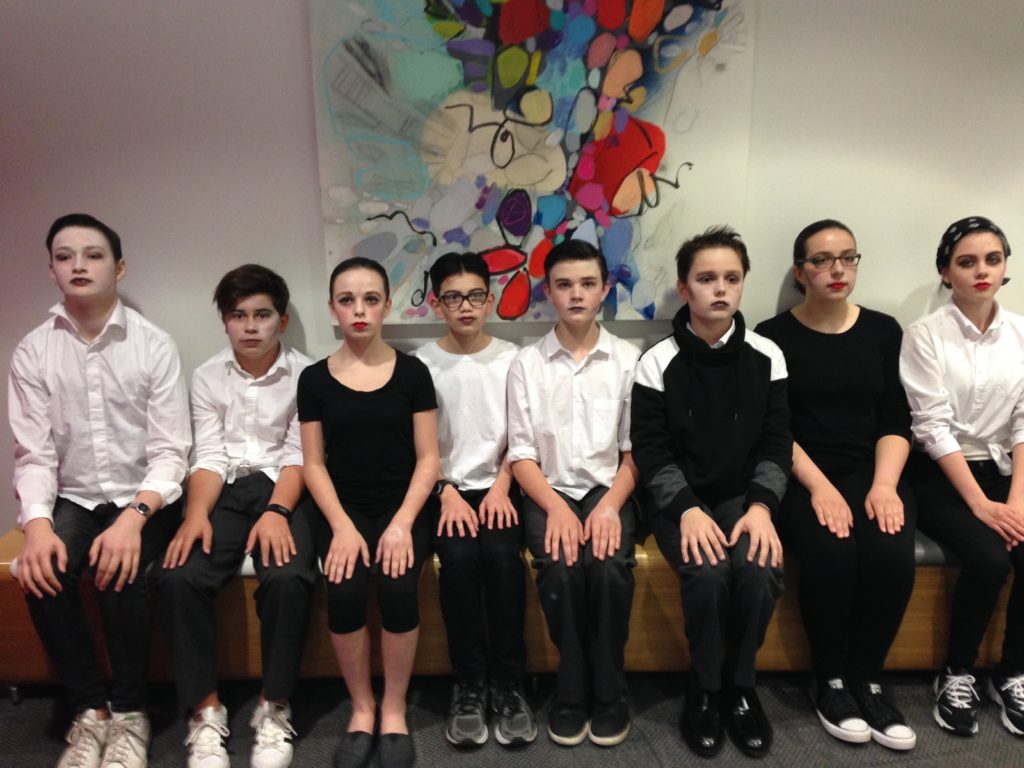